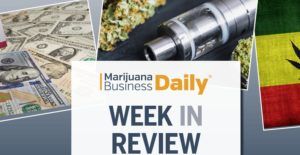 Sales fall for recreational marijuana vaping products as a health scare hits the popular press, a California marijuana banking bill dies but could return in 2020, a Massachusetts mayor is deposed for allegedly ripping off MJ firms – and more of the week’s top cannabis business news.

The vaping illness epidemic that swept through at least 33 states and claimed six lives has taken a hit on cannabis vape sales.

In California, Colorado, Nevada and Washington state’s recreational markets, sales have declined significantly since the first vape-related death was reported in late August.

Plenty of cannabis vape businesses and trade organizations are in damage control mode, issuing statements regarding the safety of lab-tested legal marijuana vaporizer products and the dangers of the illicit market.

The Trump administration is openly discussing a federal ban on flavored e-cigarettes, the governor of Michigan has already committed to such a ban, and there’s no telling how far such actions may go.

That’ll likely depend on how big the vaping illness epidemic becomes and how many people fall ill or die.

However, many in state-legal MJ industries are hoping that the illness epidemic will actually bolster the case for a more tightly regulated legal marketplace, which would be much better able to ensure consumer safety and product quality.

A bill in the California Legislature to set up a new state-chartered banking system for marijuana companies was formally shelved for 2019, but its sponsor is already promising to revive the measure in January when lawmakers reconvene.

MJBizDaily takeaway: The bill was considered a long shot by many insiders, in part because of the expenses that would be involved in establishing such a system and a fairly long runway for getting it operational.

But the bill’s failure serves as yet another reminder that elected officials have received the message that financial services need to be made available to the legal MJ industry.

Whether it passes and becomes law next year is anyone’s guess, but it may be easier for California, and other states with legal MJ markets, to wait for federal MJ banking reform from the U.S. Congress than to set up new independent banking systems of its own.

A Massachusetts mayor was charged with conspiring to extort $600,000 from at least four business owners in exchange for his support in obtaining marijuana licenses.

Jasiel Correia, 27, mayor of Fall River, has pleaded not guilty.

MJBizDaily takeaway: This is one of the most recent examples of the FBI investigating public corruption in the legal marijuana industry.

While some in the industry are concerned with the intrusion, others welcome the feds trying to root out illicit activity related to some local and state licensing decisions.

Utah likely to up licensing opportunities

A leading proposal calls for expanding the number of private dispensaries from seven to 12.

MJBizDaily takeaway: While the move likely will increase business opportunities, advocates believe even more dispensaries will be needed to meet demand. The program is scheduled to launch next year.

Similar concerns have been voiced about cultivation: The state issued only eight grower licenses, two short of the allowed 10.

A University of Utah researcher, however, has estimated that the state’s MMJ market could be slow to develop, perhaps reaching only 11,000 patients the first year and 50,000 after five years.

Jamaica is expected to roll out new regulations to govern the export of medical cannabis later this month.

Industry executives expect the new rules will underpin the long-term viability of the regulated Jamaican marijuana industry and attract investment.

The local industry is too small to sustain large cannabis businesses, they said.

MJBizDaily takeaway: More than 50 production licenses have already been granted in Jamaica and the industry is gearing up to be a net exporter of medical cannabis and medical cannabis derivatives. But don’t expect any medical ganja – that’s what they call it – to make its way to the U.S.

According to a copy of the draft export regulations obtained by Marijuana Business Daily ahead of their release, exports to the the U.S. won’t be possible they would “contravene the laws of the importing country.”

Expect business in Jamaica to seriously ramp up once the new rules are in place and companies achieve EU-GMP, which is a quality certification that effectively opens the doors to new international markets.

Where in America is marijuana still entirely illegal?

How to Save Money With Kief

Comparing the price per milligram of THC in cannabis-infused products

Need to protect your cannabis grow? Here are some security measures to consider

4% of Canadian cannabis licenses are Indigenous-affiliated, with systemic barriers ‘baked into system’

Cannabidoil Oil Benefits | I TRIED CBD FOR ONE WEEK STRAIGHT…& this is what...